At the turn of the century, Salsibury Pond was a shared resource for the surrounding industry. It provided water for nearby factory's steam generation, and it also provided something else for the people of Worcester: ice. Natural Ice, ice that is harvested from naturally occuring ice sheets on ponds in the winter, was a popular commodity in America. Worcester was home to many ice harvesters who harvested and stored ice for sale in the summer. Natural Ice quickly evolved into a huge industry, complete with its own set of technological advancements and mega-corporations. Though Natural Ice is something of the past, its impact on America is still felt today. 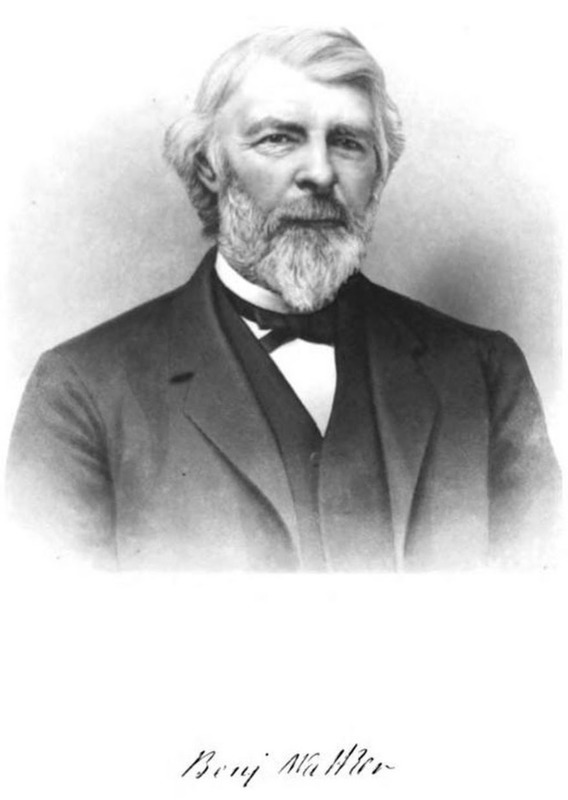 Benjamin Walker was a prominent Worcester citizen who held multiple public offices. Along with Stillman Sweetser, he founded Walker & Sweetser Ice Company in 1855 after buying an ice harvesting business from Benjamin Heywood at Indian Lake. Later renamed to Walker Ice Company (and even later, Walker Coal and Ice Company), this company was the only company to commercially operate at Salisbury Pond in Institute Park, starting in 1870. Walker Ice Company acquired multiple other local ice companies over the years, and was eventually acquired by The New England Consolidated Ice Company, a large ice trust. The company also operated at other ponds and lakes in Worcester, and owned multiple offices throughout the city. 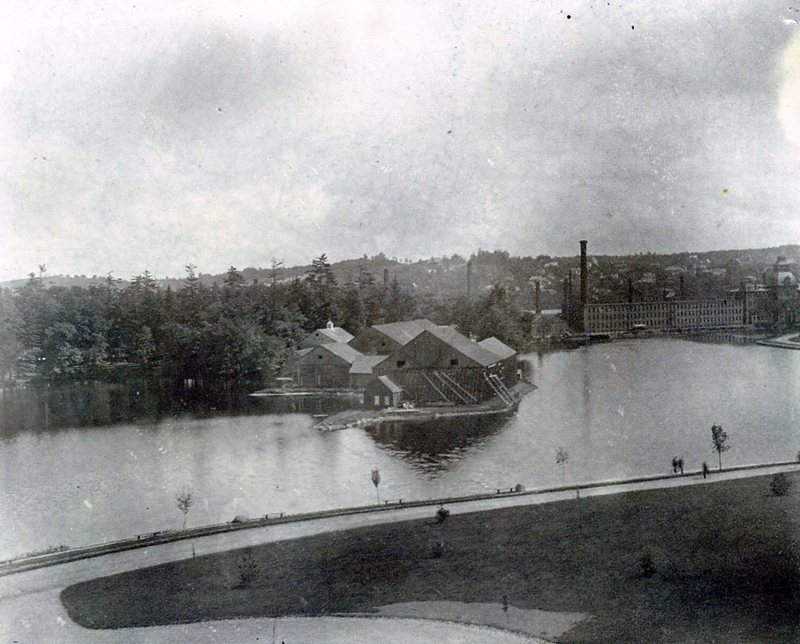 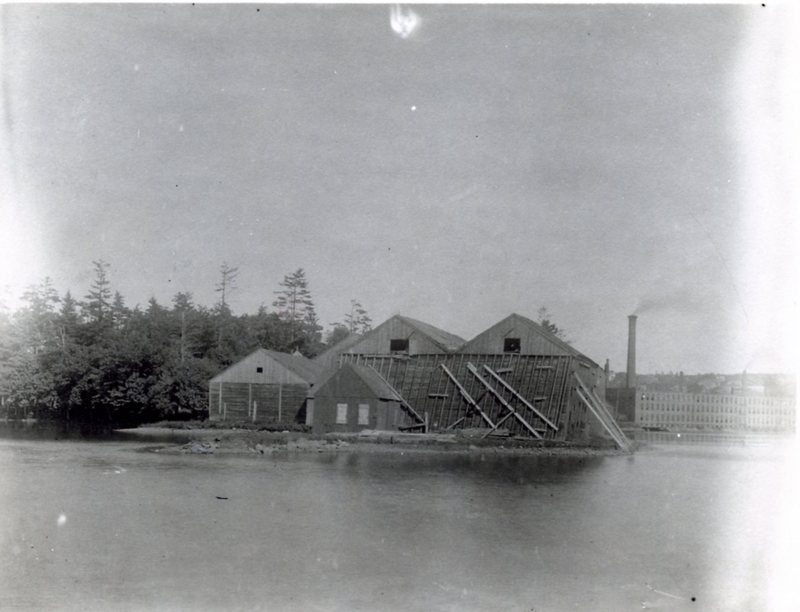 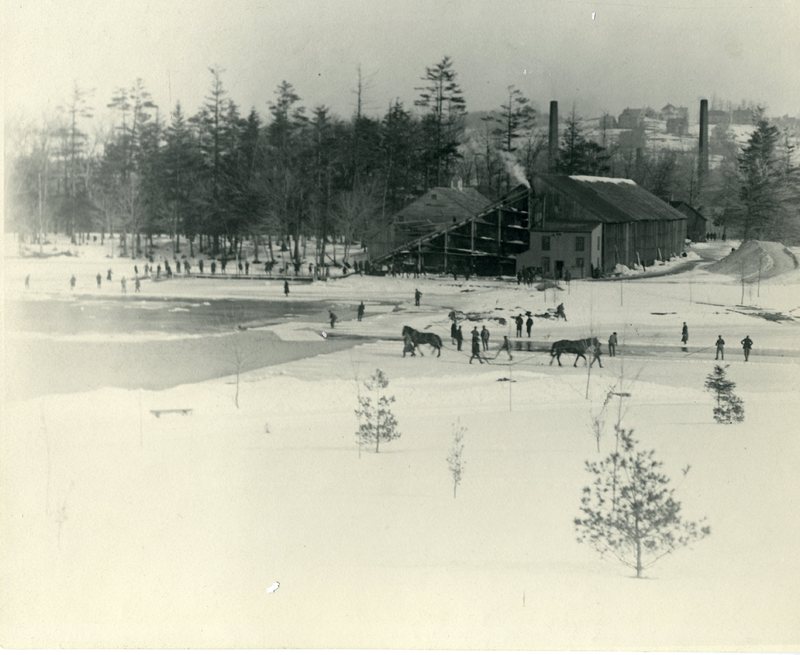 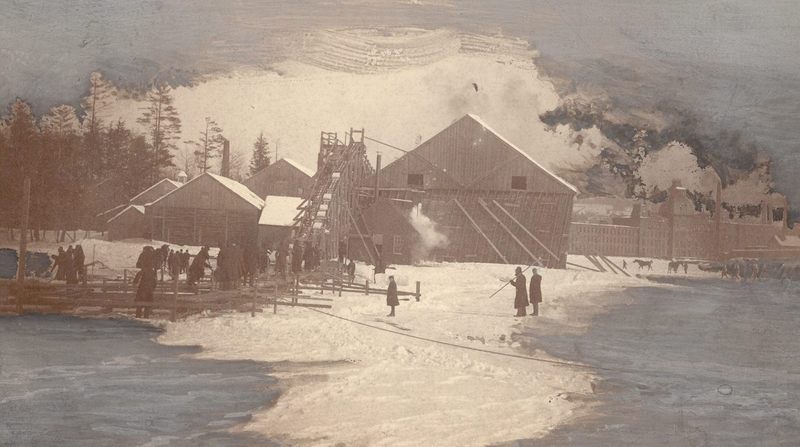 Walker Ice Company operated at Salisbury Pond from 1870 – July 4, 1901. Ice harvesters at Salisbury Pond and elsewhere cut the natural ice that fromed on the pond in the winter, stored it in ice houses, and then sold it to eager buyers in the hot summer. Ice houses were built with insulation in mind, so that ice dealers could keep their ice year-round. Ice houses featured sawdust insulation and painted white to insulate them, and treated wood floors to prevent rot. In larger ice houses, ice could keep for multiple years. This helped ice dealers deliver a consistent supply of ice all year, and made them less dependent of the weather. Ice harvesting ended at Salisbury pond on July 4, 1904 when an errant firecracker burnt the ice houses to the ground. The Walker Ice Company lost $15,000 in the fire (worth $1.5 million today). 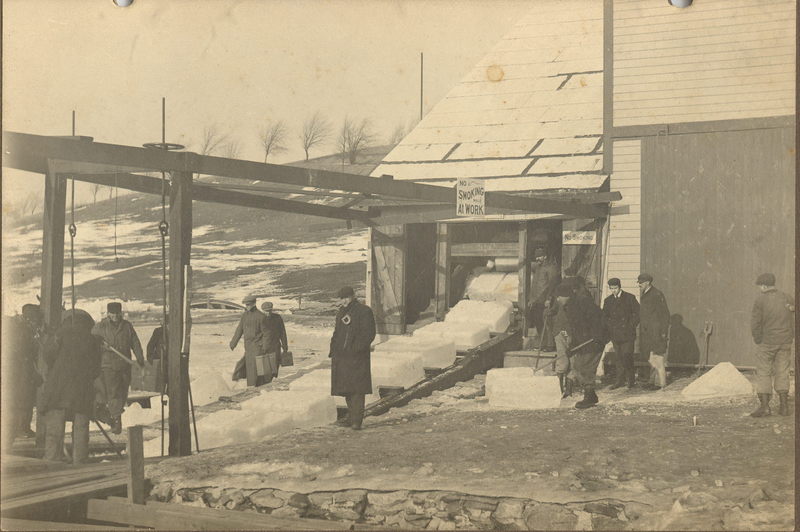 Walker Ice Company’s operation at Coes’ pond used an “endless chain”, which was essentially a conveyor belt, to move ice into their ice house there. 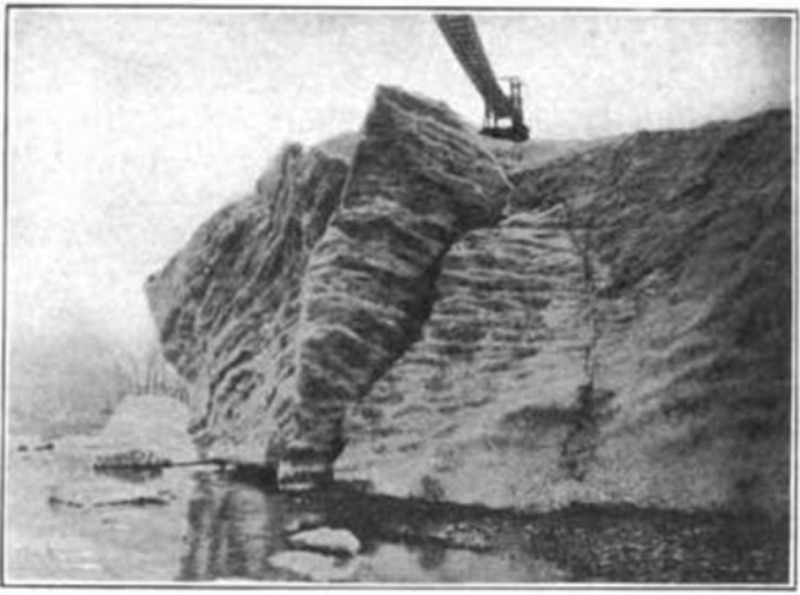 Originally, harvesting ice was a manual process. Teams of men worked together to separate and lift blocks of ice from the frozen surface of lakes. Afterwards, they dragged the ice to the ice house, and then stacked it using minimal assistance. Later on, ice harvesters used horse-drawn plows to cut the ice, and they also used horses to pull the ice.

When Ice harvesters switched to steam, they were able to accomplish even more. Steam powered large ice elevators and conveyors called "endless chains" to place ice at the highest points of their ice houses. Steam also powered ice saws and planers which helped ice dealers create regularly-sized blocks of ice. These were easier to store and were more appealing to their customers. In 1905, this process generated 20,000 tons of ice chips which formed an iceberg in Coes Pond that persisted through the end of June that year. Steam power helped the Walker Ice Company and other ice harvesting operations grow their businesses. 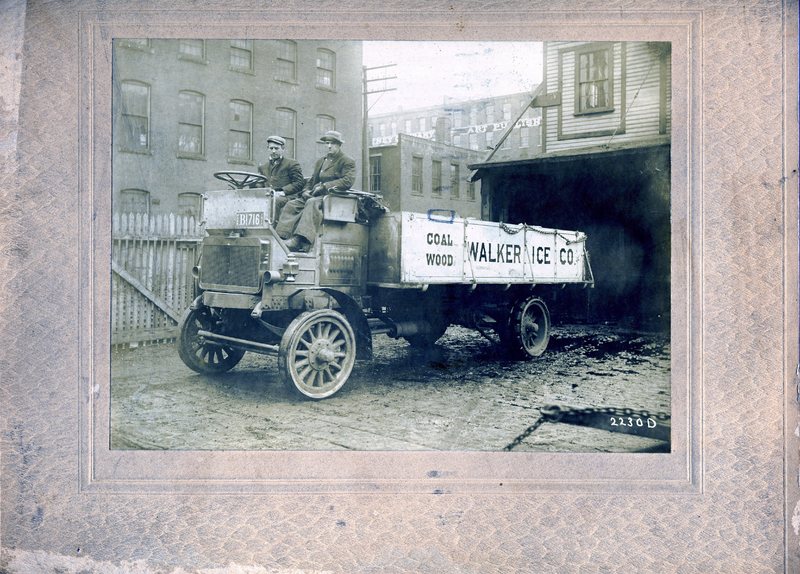 Horses originally powered ice delivery, but this solution was problematic for a number of reasons: ice wagons were slow, they overexerted horses, and they had inadequate range. This changed around 1910 when ice dealers across the country began using motorized ice trucks, which increased the volume and range of deliveries. The Walker Coal and Ice Company was one of many companies using trucks to aid in their deliveries. 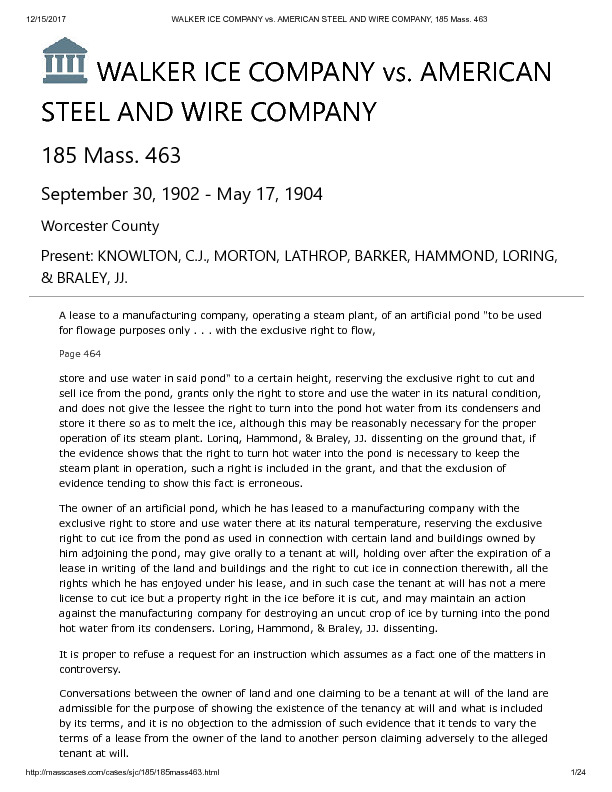 The Walker Ice Company wasn't the only company to use Salisbury Pond. They shared the pond with other companies across Grove Street, including the American Steel and Wire Company. In the winter of 1899-1900, low water levels at Salisbury Pond meant that less water was available to share, and this caused tensions between these two companies.

The American Steel and Wire company used the water in the pond for their steam powered machines, and with a low supply of water, the factory had to divert their condensed water back into the pond. The introduction of hot water melted the ice crop in the early months of 1900. Because of this, the Walker Ice Company filed a lawsuit against the American Steel and Wire Company.

After couple of years, the Walker Ice Company lost the case because their official lease on the land expired, even though they had a verbal agreement with Stephen Salisbury, the landowner. 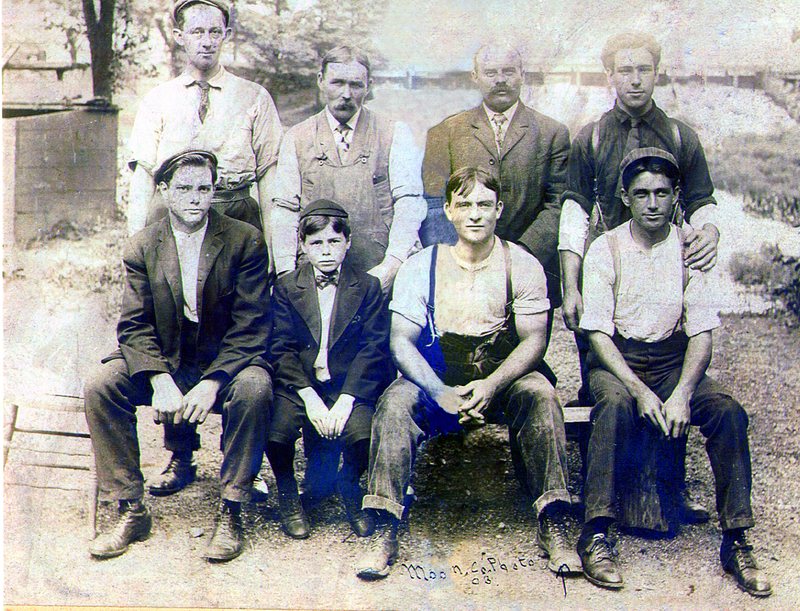 Workers of the Walker ice Company

Beyond offering employment, the ice industry provided many beneifts to Americans. The icebox helped Americans store their perishable foods with natural ice. Ice-cooled trains moved food across the nation, and gave Americans access to seasonal foods like fruits and vegetables all year for them to store in their iceboxes. Ice dealers, including the Walker Ice Company, connected their warehouses and offices to railroad networks to support the food transportation business.

Railcar refrigeration made fruits and vegetables from California available year-round to Americans and this brought massive health benefits. Before this, Americans suffered illnesses at the end of winter due to the lack of variety in their diet. Refrigerated transportation also brought fresh meat from packing houses in Chicago to the rest of the United States. Because Americans had more fresh food available to them, and had iceboxes to store it, they ate less canned foods. Thus, foods at the turn of the century tasted better, were healthier, and were cheaper because of ice refrigeration.

One other interesting consequence of household refrigeration is the ability to store leftovers. Before the natural ice industry, Americans typically cooked every day, and then discarded their leftovers for lack of a way to store them. After the introduction of household refrigeration, Americans wasted less food and spent less time cooking, because they could store leftovers. Clearly, the natural ice industry improved the American diet and increased productivity.