Another Silent Spring at Salisbury Pond

In 1970, T&G editorial writer Robert Z. Nemeth remarked “This year again, springhas been silent on Salisbury Pond.” Evoking by language of Rachel Carson’sbestseller, he lamented what had happen to a once beautiful pond but now the sightof “murky water,”“deadly pollution,” and “debris-freckled shores.” Surveying thedeserted park around the pond, he asked “Who would want to play or relax in themiddle of decay.” His was not just a lament, but also a clarion cry for action to cleanthe pond and restore the park. Earth Day had come to Worcester. 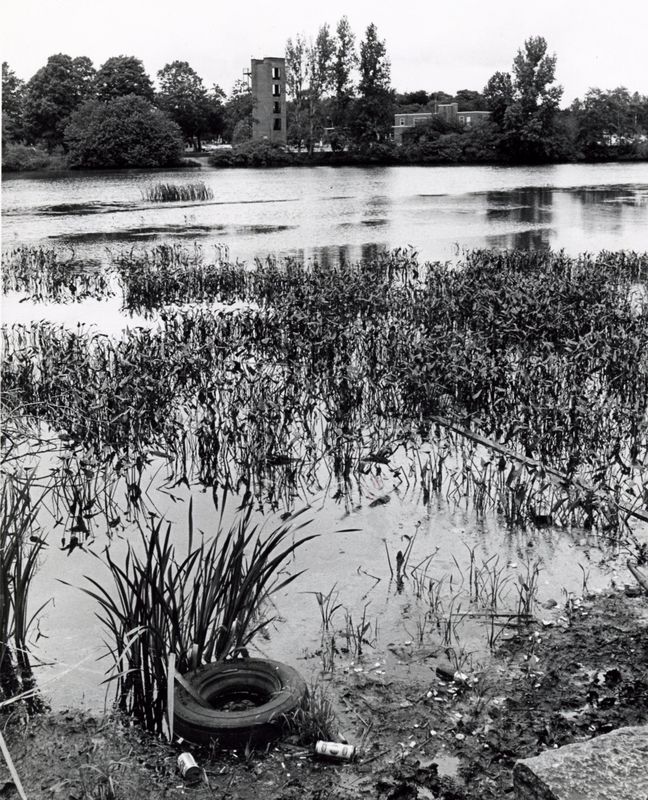 By 1970, Salisbury Pond had a host of environmental problems from pollution,sediment, and persistent weed growth.

In the summer of 1967, Worcester’s Department of Public Health came to thestunningconclusion that local industries were illegally dumping waste into abrook feeding Salisbury Pond. This conclusion led the city to contact severalcompanies along Gold Star Blvd, bordering Mill Brook, and hold a meetingregarding the pollution in Salisbury Pond. The companies more or less receiveda slap on the wrist for maybe the first but not the last time.

A grave sedimentation problem emerged in the 1960s as well,when Weasel Brook was diverted into the Salisbury Pond, allowing Marshall Pond to be drained for the expansion of an industrial park. The sediment now collecting in Salisbury Pond brought with it the added pollution of facilities that drained into Weasel Brook.

In 1970, students from Worcester Polytechnic Institute began working with the city health department to investigate this pollution more thoroughly. This plan crumbled by 1971, but public concern for the pond continued to rise. In 1972, the Department of Public Health allocated $25,000 ($150,000 today) for anti pollution measures.

A citizens group, Salisbury Pond Task Force, emerged to push the City toward cleaning up Salisbury Pond, and the city responded with a flurry of plans and studies in the early 1970s. However, progress on the clean was elusive and uneven. In 1972, the city hoped to dredge the pond, but it never acquired the necessary permits from the state. Then in the spring of 1974 another oil spill fouled the pond.

The Task Force working with city official and WPI students continued to plan for dredging the pond. In 1974, their plan was approved by the state and the Navy SeaBee arrived to begin the work. By the end of the summer, 5000 cubic yards of sediment had been cleared from the pond, only a portion of the original plan. WPI studies had identified 12,000 cubic yards of critical sediment to be removed of the 86,000 total cubic yards of sediment in the pond. Small victories were still victories for Salisbury Pond.

However, this victory would not last long as the recent completion of I-90 and lack of attention from the city government resulted in significant amounts of silt and trash accumulating in the pond. To make matters worse, remnants of Hurricane Belle struck Worcester in 1976, washing oil, dirt, and trash into the pond.  Two years later, in the spring of 1978, disaster struck Salisbury Pond once more, as nearly 500 gallons of oil was discovered in the pond as it thawed. The Department of Public Health acted fast in cleaning the oil out of the pond, but never found a culprit.

Through out the 1970s forward motion on cleaning Salisbury Pond was almost always met with environmental setbacks. “Not Salisbury Pond Again!” became a frequent lament of the Telegram & Gazette editorial page

Problems persisted with pollution in Salisbury Pond into the 1980s, but the city’s resolve containing pollution stiffened. A spill of several dozen gallons of cooking oil occured in 1983, but was quickly contained. Later that year, new plans for dredging were devised, although they would never come to fruition. The city also acquired a grant worth $45,000 ($110,000 today) in 1984 to investigate ways to clean the pond.

Even with this progress, pollution still occurred. In 1988, industrial solvents of unknown origin seeped into the pond, killing birds and fish. The city threatened fines, although no one was found responsible.

The number of incidents has decreased over the decades but have not ceased completely. In 1996, titanium dioxide, a non-toxic white pigment leaked into th epond from a vandalized train car. Again in 2002, gray liquids appeared in the pond. This time however, the cityd iscovered its source. Over a year later it was determined to be cleaners used in remodeling the Gold Star Blvd Home Depot, resulting in an over $30,000 fine to help clean the pond.

While no major spill has affected Salisbury Pond in many years, the residual contamination and silt still affectsthe pond. A 2001 WPI study determined dredging the pond could make the silt problem worse by changing how water flows through the pond. And even if it was dredged, the muck is so contaminated it must be removed and deposited in a special manner, at a cost of over $8,000,000.

Salisbury Pond has come a long way since the 1960s, but it still has a long way to go before it is clean again.